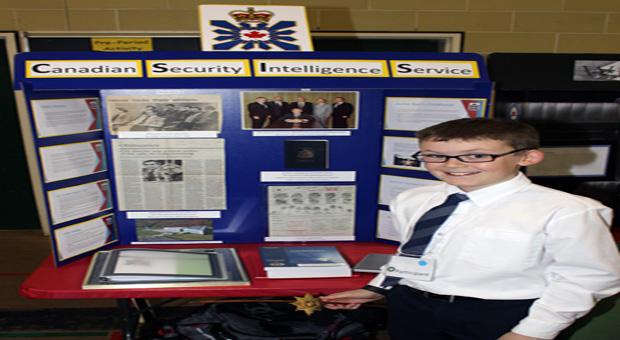 Have you ever watched a movie or read a book abou the FBI, the CIA, or M16 and wondered what the Canadian equivalent was? Well now your wondering is over. My Heritage Fair project for this year is on the Canadian Security Intelligence Service (CSIS). It is Canada's main intelligence service, and has been helping to keep Canada safe from threats since 1984. This project is about the history of CSIS, my grandfather, Archie Barr, who was one of the founders of CSIS and the Deputy Director of National Requirements. My project also discusses one of CSIS' biggest investigations: Air India Flight 182, which was the most expensive trial in Canadian history.

Before 1984 threats to the safety of Canadians were determined by the Royal Canadian Mounted Police. In an increasingly global world, the government decided that a new department solely concerned with potential and real terrorist attacks was needed. The CSIS was formed. Since that time it has not only investigated terriorist attacks such as Air India Flight 182 but has also stopped many attacks before they happened. The CSIS plays a very important role in keeping Canadians safe.

The CSIS works very hard to keep Canadians safe. Canadians should feel more secure that we have such a group monitoring terrorist activity around the world, investigating potential acts of terror in Canada, working with groups in other countries to share information.

Keiran won the grade 5/6 medal and was chosen as a Provincial Fair representative in 2015.